Brad Lives in an Abstract World

Mood swings have always been an issue for me - all my life. I remember once, as a child of about five - my dear grandmother drove near over an hour and a half to Navarro County, to visit her siblings - my Grand-Uncles and Aunts. It was a great trip getting there, and there was no indication over how the outcome of this trip would turn - until it did... After the long drive - I became scared, and refused to get out of the car - to go into that big old house, and visit... Of course, I was a child, and I never really saw these people but once a year, in my very short life - always in this little town, many counties away from home. I can't remember it as clearly, now, some 60 years later, but - I recall, at least one each, of my Grand Aunts and Uncles, did try their hand at coming out to the car, and trying to convince me to come in. It wasn't that I was scared of them - I just did not feel comfortable around 'Big' people, and strange large houses... Apparently, there were no other kids there - to come out, coax, and wheedle me with kid-persuasion - perhaps a pilotable crux of my need that day.

I'm sure in many a family, my, "feelings," would have been ignored, and someone, big enough, would just have come out and scooped me up, screaming, and taken me into the house - maybe told me how disrespectful I was being to my dear grandmother. Retrospectively, what I did was embarrassing, and humiliating - creating a scene like that for my grandma. Bottom line though - my mom wasn't with us, and no one wanted to take on temporary parenting skills toward actions that would only bring my child-ire, from the car, into an otherwise, peaceful houseful of people... So, they left me in the car, and my grandmother had a quicker, shorter visit, and dinner, than she deserved - for all her trouble, and the near 130 mile long journey. I am sure she begged forgiveness to her siblings for my behavior - however, on that long drive home - she didn't scold me, or say anything about the incident. In later life, as an adult, I never asked, "Mimi," if she remembered it - after all - I wouldn't be reminding her of one of my more proud moments, but, I never forgot it! It was the first time, I believe, I was old enough to feel ashamed of my personal behavior, and I just knew it had hurt Mimi's feelings. I did not have the wherewithal to apologize - but I would forever be straddled with this memory, and, deservingly so... And that is the basic missive of my story. 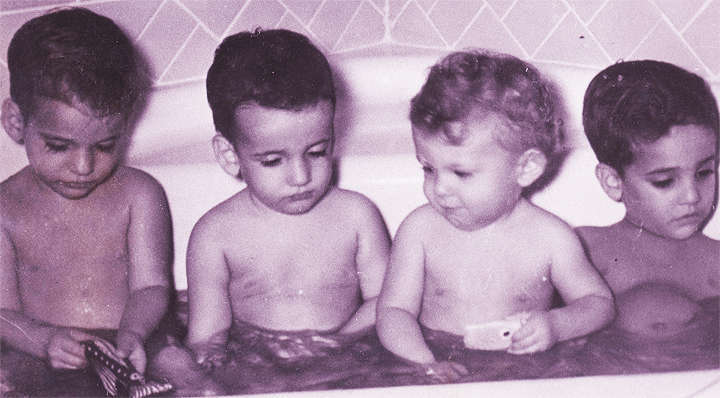 There were no later repercussions for my behavior. Later that same year, my grandmother, my mother, and my two older brothers - all returned back to Corsicana, for the annual, "Family Reunion," my mother's side of the family always had had. It was held at a different location from my last visit. This was 1957, and times, and the idea of, "Middle-class American Family," was so much different - from the way our lives play out now, for the most part. Simpler times, simpler people... When my grandmother's generation grew more elderly, or passed away - so did our, "Family Mechanics." There would be no more extended family reunions - families were splintering... My parents divorced when I was in early primary school. As far as I could tell - I was the first kid in our school that lived with only one parent - where there wasn't a tragic death involved. In fact, some of my friend's parents would not allow me to come to their sleepovers - once my mother was a single woman... What the exact prejudice was that was being castigated upon us I don't know. I just knew I was different now, and would be treated differently by everyone - from my friends, on up to my teachers, and officials at the school. Worst of all - I would grow up a fatherless son.

President (1955) of the American Bankers Association,